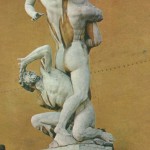 In  1998 i was commissioned to replace the missing statue of a 18th century copy Of Giambologna, Rape of the Sabines.
Prince Charles & lord Palombo where running the Painshill park trust. Renovation was undertaken of the original 18th century garden where most of the important  sites such at the grotto Gothic tower and the copy of the statue designed by a dutch sculptor Avander Nost  it the late 18th century . Lord Hameltons garden fell into disrepair. The Sabine group was lost(stolen for its metal).
For this purpose  i was sent to Florence to study the original to replace the missing sculpture. To study the gesso model in the Academia. A scaffold was erected for Evelyne ( my wife) and I to aid our measuring and photographing of the piece.

35cm tall maquette were made to aid in the modelling 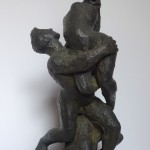 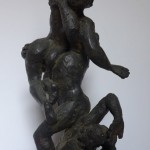 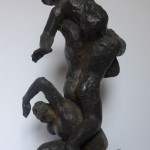 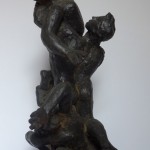 This information was eventually brought back to the AB foundry. An Armature was built after 6 weeks and with difficulty i completed in modelling in clay. 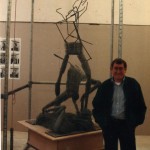 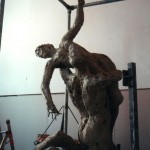 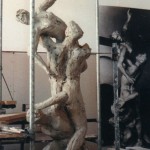 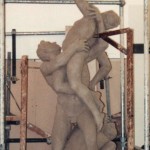 During the process of modelling the Sabine group I was at Painshill to find out how Giambologna had devised the complex movement. Especially the top figure, of the Sabine woman. 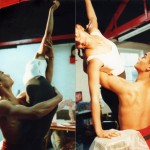 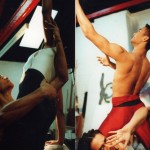 For this purpose I used two young dancers who tried for me to reproduce the movement in a static position, Which proved impossible to hold.
I therefore deduced that the movement was done actually in motion. The males figure sweeping up the female arresting momentarily at the top of the sweep when she was at her lightest point. 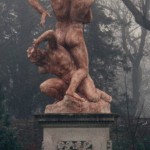 A plaster cast was made  and taken out to Painshill to try it out on the original base.

From this plaster a bronze cast was made and eventually erected on the original plinth. 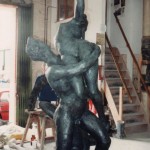 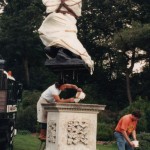 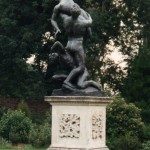 In more recent times because the mould’s were starting to show deterioration  it was decided to make a second cast which was presented to Birmingham university by the art fund in 2013. 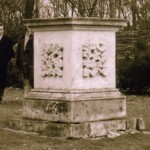 A copy of the original base is currently being made and will eventually be set outside the Barber institute.