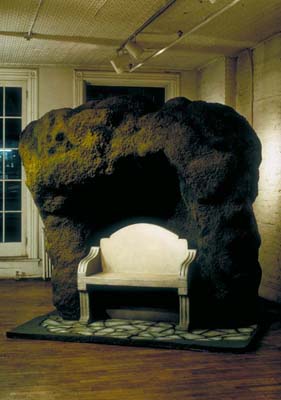 The Retreat was created in the early 1970s, a period during which Abrahams became fascinated with the subject of gardens, shrubbery and suburban spaces. During this time the artist created prints, reliefs, small-scale sculptures and larger works using a range of non-traditional materials and colours.

This was the first of Abrahams’ large garden sculptures, and was exhibited in a solo show of work by the artist at the Richard Feigen Gallery, New York in 1970. It was subsequently exhibited alongside work by Robert Morris and Christo in Alternative Landscape at the Cincinnati Art Center.

This piece demonstrates Abrahams’ use of flock, which began in 1968 with the sculpture Nude Statue on a Lawn, and which the artist repeatedly employed in his sculptures and prints to create surface texture and colour for foliage and other shrubbery. The artist has said of his work and the relationship to surface, ‘colour is surface for me. I sought to apply colour to everything I possibly could’.

The Retreat was eventually gifted to Vassar College in 1973, by Joyce Petchek.