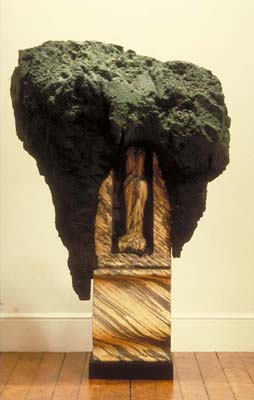 Lady in a Niche was created in the early 1970s, along with several other sculptures and prints relating to the subject of gardens, such as The Retreat (1970), Wall (1972) and the Privacy Plot series of prints (1970).

The piece features a classical-style statue placed in a niche, surrounded by foliage. It demonstrates Abrahams’ use of flock, which the artist repeatedly employed in his sculptural work, to create surface texture and colour for foliage and other shrubbery.

First shown in Cologne at the Kolnischer Kunstverein in 1973, and in Rotterdam at the Lijnbaan Centrum in the same year. Subsequently exhibited at the Whitechapel Gallery, London in 1982 as part of the ‘British Sculpture of the Twentieth Century’ exhibition.

Lady in a Niche was acquired by Tate in 1982, in a purchase from the Mayor Gallery.