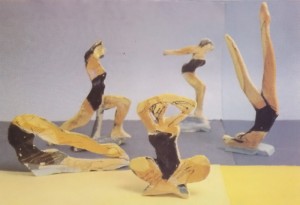 Early last year Fulham Pottery invited Ivor Abrahams to collaborate on a ceramic project. Preliminary test pieces were made, an association was confirmed, and the artist began work in November 1982.

With the aid of Fulham Pottery technicians, a ceramic workshop and kiln house were established exclusively for his use. Exhaustive glaze tests were carried out for the artist by Sally Bowling (the assistant appointed for the project). and a range of suitable colour effects was chosen.

Traditionally ceramic designers have always gone for foreseeable and predictable results, expressing a concept already formed before the clay is modeled, and prior to its entering the kiln.

The difficulties of working as a sculptor in a craft environment are fraught with problems, that spring primarily form differences of attitudes and demarcations between craftsman and artist.

How ever, at Fulham, proclivities to painting and sculpture were quickly asserted. Meticulous attention to surface and edge, hold gravitation pulls, and subtly tensions were built into these figure groups.
Silhouettes were cut, contoured, pressed and embossed into graceful movements, whose fluidity of line and direct colour washes exhibit clearly a debt to Rodin’s later drawings.

Within the best modernist manner, these ceramic sculptures display a spontaneity of execution characteristics display a spontaneity of execution characteristic of an artist known for his innovative approach to materials. Abrahams has produced a range of outstanding compositions, consistent with the high quality of work on which he has established an international reputation.