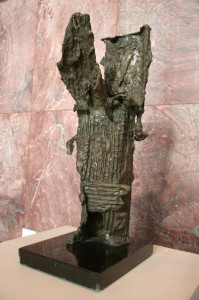 By 1959, Ivor Abrahams was beginning to make his way in the London Art World. The New Vision Gallery showed early interest in his work, and enabled Abrahams to cast some pieces in bronze at the Fiorini Art Bronze Foundry, where he was working. For a young artist aged twenty-four this was encouraging. Henry Moore (1898-1986) was a towering presence, ‘the king pin’, as Abraharns puts it.
Anthony Caro (b.1924), who was his first teacher at St Martins School of Art, was to
make his mark in the 1960s, but it was Eduardo Paolozzi (1924-2005) who was a significant influence on Abrahams, especially so at that point in his career.
Abrahams’ first solo exhibition was held in London at Gallery One in 1962, although he had exhibited in 1960 with the Pop Artist, Peter Blake (b.1932), at the Portal Gallery, London. From then on he flourished, but with the general ups and downs of a creative life, including depression, which has dogged him from time to time. He worked through those periods, becoming stronger in the process. His work has developed and changed, sometimes dramatically, over the past forty-seven years. His progress is interesting in that he relocates constant themes, returning time and again to urban landscapes, classical figures, gardens, and the sea. Combined with an
Exceptional ability to rework popular and accessible imagery through new techniques and materials, Abrahams’ sculptures and prints continually surprise and delight. 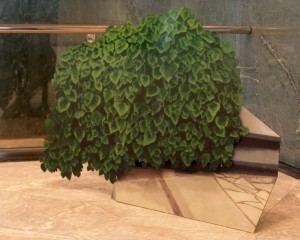 The early bronze in this exhibition, Font 1959, is clearly inspired by the urban landscape – London in the aftermath of the Second World War blitz – which he had seen as a child. Abrahams worked directly in wax to produce the series of bronzes that was shown in Gallery One. He then turned to the figure, inspired by commemorative and honorific statuary of the nineteenth century. Experimental use of materials had become part of his practice, as well as treating the surfaces of his sculptures with colour.
While teaching in Birmingham in the early 1960, Abrahams took a misshapen nude figure made by a student and placed it on a synthetic lawn, this became the first of his garden pieces, with the latex lawn surrounded by crazy paving. This sculpture formed the idea for his first garden print on flock paper. Flocking became his material, worked over fibreglass and plaster, enlivened with paint. The new works were as startlingly colourful as the seed packets that lay at their source, and a newly-found sense of fun entered his sculptural repertoire. The gardens were to establish his international reputation, with major shows in Germany and the USA, and Shrubbery Group 1973 remains a powerful statement. Gardens and plants also found their way into his prints.
With the figure abandoned, Abrahams concentrated on garden imagery — planting and architectural details, shrubs and ivy, lawns, steps and pathways, walls, follies and romance. He enjoyed the garden as a ‘ready-made’, a stock repertoire of forms and effects representing a ‘group desire’, something dear and cherished by the English. A big subject, but in some ways limited, he eventually found a way out through the ‘Garden Gate’. Abrahams then revisited the figure, making a number of gates, including two fine examples seen here: Large Gate 1984, and Sea Gate 1988. 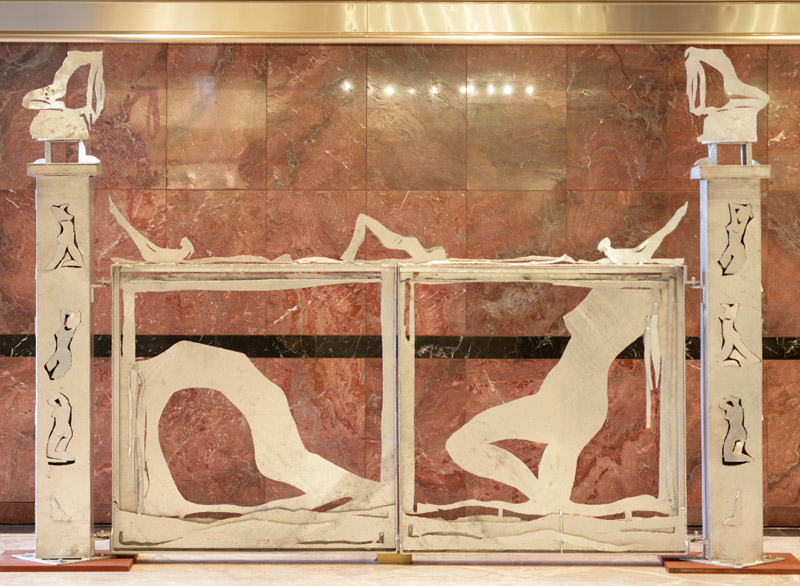 Within Large Gate figures cavort and play in compositions that look as alive and new today as they did some twenty years ago. 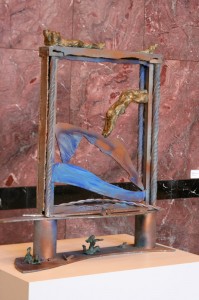 For fourteen years, Abrahams worked in Hoxton then took a studio at AB Foundry, next door to Barry Flanagan (b.1941), where he stayed till the late 1980’s, casting many large bronzes. He was busy with exhibitions, including a large solo show at the Yorkshire Sculpture Park in 1984, and a number of international exhibitions. Later, he renewed his interest in life drawing and sculpture, and working from the model. Like Auguste Rodin (1814-1917) and Edgar Degas (1834-1917), his models were dancers and gymnasts. He kept them moving in preference to static poses, and was overwhelmed by their form and energy. He made great numbers of successful sculptures, many shown by Bernard Jacobson and James Mayor in their West End galleries. The gymnasts and dancers were made both flat and painted, and in full three dimensions, in steel, ceramic and bronze. One of the most significant public pieces that Abrahams made at this time was Les Naiades 1985, until recently located at 45 Whitechapel Road, the site of a Mikveh, a Jewish ritual bath mostly used by women.
In 1991, Abrahams moved to southern France and began to bring classical themes into his work. He felt he was living in an empty classical landscape and decided to people it, creating his own version of the classical world through figures, stairways, boats and columns. He worked extensively in ceramic, a traditional local craft. However, after eight years away, he was beginning to feel the need to engage again with metropolitan life. In 1999 he and his wife returned to London. 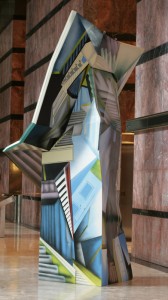 Towards the end of his time in France, Abrahams had started to make new models based on classical themes, not fully three-dimensional in clay as he had been working earlier, but in foam board with photo-collage techniques. The sculptural forms were reminiscent of 1950s advertising cut-outs.
The imagery used – largely architectural details – also informed their shape. The surfaces were colourful, full of movement and with more than a nod at Synthetic Cubism. This way of working still occupies Abrahams, but work of a lighter vein began in London.
Back in Britain, Abrahams set about re-establishing himself. Whilst he was away, businessman and entrepreneur Wilfred Cass had founded Sculpture at Goodwood, now known as the Cass Foundation. Abrahams showed Cass an idea for a sculpture, and the Foundation enabled the fabrication of head of the stairs 2000. The piece is loosely based on a – human form – a head and torso – but the imagery was taken from the stairwell in Abrahams’ London home. Although made for outdoors, at Canary Wharf this sculpture stands inside.
Carnival of Animals, an exhibition in The Hague in 2001, presented Abrahams with the opportunity of adding animals to his repertoire. Encouraged by his dealer, James Mayor, Abrahams made a giant cockerel, the maquette for which is in this exhibition; he also made a hen. These two fully three-dimensional sculptures have collaged surfaces, finished with a thick layer of acrylic resin for strength and water-resilience. Abrahams had rediscovered in himself the need for his sculpture to be accessible – as it certainly had been with the garden sculptures. He embarked on a series of owls in 2004, finding that the owl had a profile on which to load urban imagery and landscape. 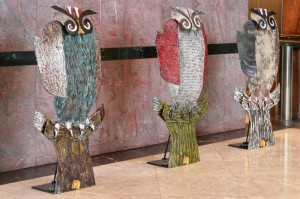 In a highly successful exhibition A Parliament of Owls at the Mayor Gallery in 2005, the owl sculptures were launched. He made them in all manner of materials in a flurry of great creativity – collage onto both two-dimensional and three-dimensional forms, some enamelled steel, others in polychrome bronze, or epoxy resin and Decal. He found great freedom throughout their making, and the forms themselves are exuberant, joyous and whimsical, with a hint of menace.
In the words of the writer and poet, Andrew Lambirth, ‘Here is an artist working at the peak of his artistry and artfulness, calling on a lifetime’s experience of the manipulation of form and colour. Once again, investigating the constitution of reality through the interaction of nature and artifice. And it’s a joy to see!’ 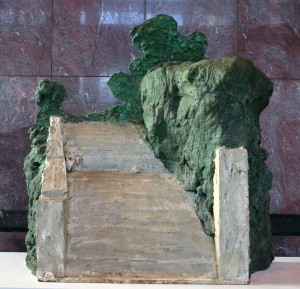 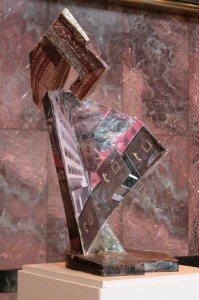 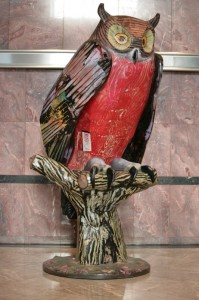